In Spring 1988 the now defunct ferry from Hamburg to Harwich had an irresistible return trip offer for less than 50 DM. So, I cycled around London for a week by myself. It was a bit grey and cold, I seem to remember. There was one morning with ice on the road. In Kent you could still see the storm damage from the previous year. I stayed in B&Bs, most of them were actually shut as it was distinctly off-season. But they took mercy on a mad German cyclist and I found somewhere to stay every might. I do remember taking a ferry in Gravesend to cross the Thames. The trip from Oxford to Cambridge was done in one day. Towards Cambridge I remember a very straight Roman road going over hill, which was rather tiring at the end of a long trip. There was also somewhere a 25% gradient where I had push my bike. After arriving in Bury St. Edmunds I phoned the ferry company and was able to change my ticket to an earlier return date. After a week and a half I had enough of cycling in the cold. Still quite an experience, if only to find out how boring and lonely cycling by yourself can be. (Approximately 400m/640km) 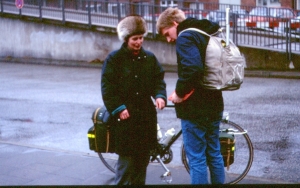 About to board the ship in Hamburg 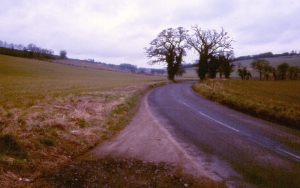 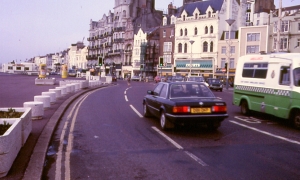 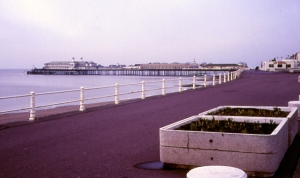 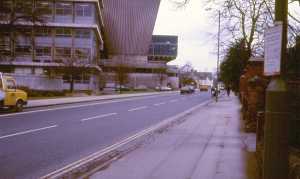 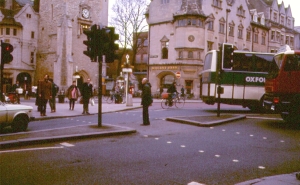 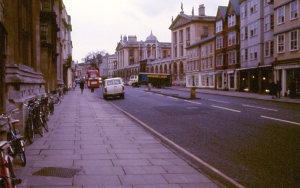 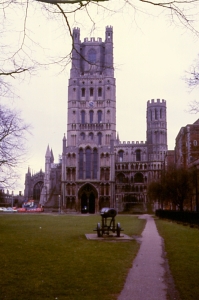 A very uneventful crossing on the now defunct ferry link between Hamburg and Harwich using the luxury couchettes.

A very hilly 30 km following the minor roads to Colchester in fading daylight.

As most of the other days a very grey and cold day. The landscape was very flat. I remember being relieved to find that the ferry took bicycles, this was not very clear from the information I could gather beforehand.

The previous day had been flat, this day was hilly. I wasn’t prepared for English hills and their short steep slopes. At one point whilst going across the M20 and M26 there was a 25% hill that forced to get off and push the bike up the hill. Later on Tonbridge I was amazed by the straightness of the railway line that continued to either side as far as the eye could see. After a small detour to Battle attempting to find the battle of Hastings I arrived in Hastings.

That morning it was very cold, there had been frost overnight and some of the puddles along the road were frozen over. In Billingshurst I found space in a B&B that took pity on a mad German cyclist and gave me a room despite being closed.

The only thing I remember of this part is cycling past Ascot racecourse. If I’d known I’d end living close by later in my life I probably would have paid more attention and even would have visited pretty Reading. I arrived in Henley after sunset and in the dark I phoned several B&Bs from the telephone box before I finally found one that was open.

Another cold day but I found a B&B quickly to warm up.

Sightseeing in Oxford: I remember going to the Ashmolean, but not much else. I walked around the city centre, had a look at the Engineering department and the park.

This turned out to be an easier trip than I anticipated. There were no major hills, apart from one close to Cambridge. Just outside Cambridge I stopped to admire the One mile radio telescope.

I had a good look around Cambridge and its bookshops.

Sightseeing in Bury St. Edmunds and I also phoned the ferry company to bring my return journey forward by two days.

A short trip to Harwich, made more exciting by hills and flat tyre thanks to a thorn from a hedge. But I made it to the ferry in time.

In Hamburg I cycled to Altona station and took the train back to Kiel.

I was surprised how few B&Bs were open in March, this made finding a place to stay overnight quite exciting every evening and also you had to stop early just in case you couldn’t find a B&B in the next town. Cycling in March is cold but possible.